Natalia Ginzburg is making a lot of waves on Twitter these days, and rightly so. I had really liked Family Lexicon published by NYRB Classics and had also recently acquired Valentino and Sagittarius released by the same publisher. But it’s The Dry Heart that kept calling out to me…and having now read it I can say it’s another excellent piece of storytelling by Ginzburg.

I shot him between the eyes.

The ‘him’ is none other than the narrator’s husband Alberto, a man considerably older to her. What follows, thereafter, is an unsentimental, psychologically astute tale of an unhappy marriage told with astonishing clarity.

Our narrator and Alberto first meet at a doctor’s office and from thereon begin to see each other regularly. Our narrator is a woman in her late twenties living independently in the city. But it’s a dull existence. After teaching literature to eighteen girls huddled in a cold classroom, she spends her evenings and nights at a dingy boardinghouse made worse by a bunch of noisy neighbours. Weekends at her parents’ home in Maona in the country are even more tedious.

Her meetings with Alberto therefore are imbued with some degree of novelty and offer respite from the tedium of her narrow existence. During these initial days, in the first throes of a possible blossoming of romance between the two, our narrator is quite happy. Walks by the river, Alberto reading Rilke poems to her, long conversations in cafes add much colour to her life. And yet something is amiss. While she talks openly about herself and her family, all the while thinking up interesting topics of conversations to amuse Alberto, it seems like a one-sided effort. Alberto finds her company charming but remains largely inscrutable, he is reluctant to delve into the details of his life.

At first I didn’t mind Alberto’s unwillingness to talk about himself, but later I was disappointed and asked him a few questions. His face took on an absent and faraway expression and his eyes were veiled with mist like those of a sick bird whenever I inquired about his mother, or his work, or any other part of his life.

Having been alone for so long, our narrator consciously overlooks this aspect of Alberto’s personality. She also wonders whether she is in love with the idea of Alberto rather than Alberto himself, of what he could be rather than what he actually is.

A girl likes to think that a man may be in love with her, and even if she doesn’t love him in return it’s almost as if she did. She is prettier than usual and her eyes shine; she walks at a faster pace and the tone of her voice is softer and sweeter. Before I knew Alberto I used to feel so dull and unattractive that I was sure I should always be alone but after I got the impression that he was in love with me I began to think that if I could please him then I might please someone else, too, perhaps the man who spoke to me in ironical and tender phrases in my imagination.

It’s a relationship that raises conflicted feelings within her. For instance, the idea of marrying Alberto and being intimate with him repulses her, and yet on the days when he is away, she is so gripped by loneliness that the thought of not seeing him unsettles her.

The two eventually marry, but the marriage is doomed from the beginning. The bare facts of this union are presented to us on the first page itself and therefore not a spoiler – Alberto and our narrator were married for four years, they had a baby and the baby subsequently dies.

We had been husband and wife for four years. He had threatened often enough to leave me, but then our baby died and we stayed together. Another child, he said, would be my salvation. For this reason we made love frequently toward the end, but nothing came of it.

Alberto is a terrible husband, lacking empathy, warmth and trust so essential in a marriage. He is away from their home for long stretches of time and resorts to lies to cover up his absences. But it’s imminently clear to both the reader and our narrator that he is secretly seeing the only woman he has ever loved – Giovanna – who, ironically, is married to another man and has a child of her own.

As the drama unfolds, the reader increasingly begins to feel that the narrator’s life before marriage had its merits after all. Atleast she was independent then even if her circumstances were far from ideal. On some level, the narrator is painfully aware of this. And so it’s fascinating that she prefers to remain wedded to her flighty husband rather than part ways and reclaim some dignity. However, so fearful is she of loneliness that she mistakenly equates being alone with being lonely. Her way of thinking is in striking contrast to that of her cousin and confidante, Francesca, who revels in living life on her own terms and refuses to be tied down to any committed relationships.

The Dry Heart, then, is a novella that takes us into the anxiety riddled mind of a woman trapped in a loveless union – her insecurities, her dashed expectations, her inability to walk away when there are clear signals telling her to do so, and the circumstances that compel her to eventually crack. It’s a tale that plunges into the chilly waters of loneliness, desperation and bitterness. The prose is stripped of any sentimentality, the narrator’s voice is unemotional, unvarnished…she states things the way they are, and if her seething rage is palpable, it just about stays under the surface, always in control.

I have only read two books by Ginzburg but it’s apparent that she excels at depicting a range of oddities in relationships, whether it’s the quirks and foibles of various family members as seen in Family Lexicon, or the shortcomings and failures in marriage as in this novella.

Chilling, direct in what it wants to convey and deceptively simple, The Dry Heart charges ahead at the pace of a thriller but without any liberal doses of twists and turns that are so definitive of the genre, and it’s all the more powerful because of that. It’s an absorbing story where Ginzburg, through the magic of her writing, transforms the raw material of a dull marriage into a unique, rich finished product brimming with psychological depth.

Fascinatingly, it ends just as it begins…

I shot him between the eyes. 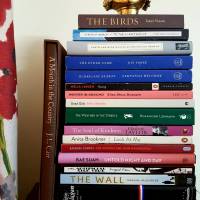 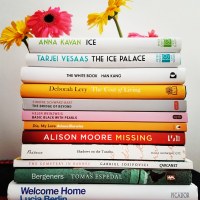 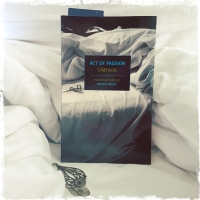